Over 100 PhD candidates from 31 leading universities applied for the fellowship and twelve promising candidates were selected this year. Fellows will receive a cash award of US$10,000 for research and academic activities, an optional three-month internship opportunity at MSRA, and collaboration opportunities with researchers from Microsoft Research.

The MSRA fellowship identifies the next generation of research leaders and offers a prestigious mentorship and academic programme for its fellows. Since its inception in 1999, the programme has received over 1,400 applications and selected 417 PhD students from China, Hong Kong, Taiwan, Japan, Korea and Singapore.

Securing Bitcoin by attacking it 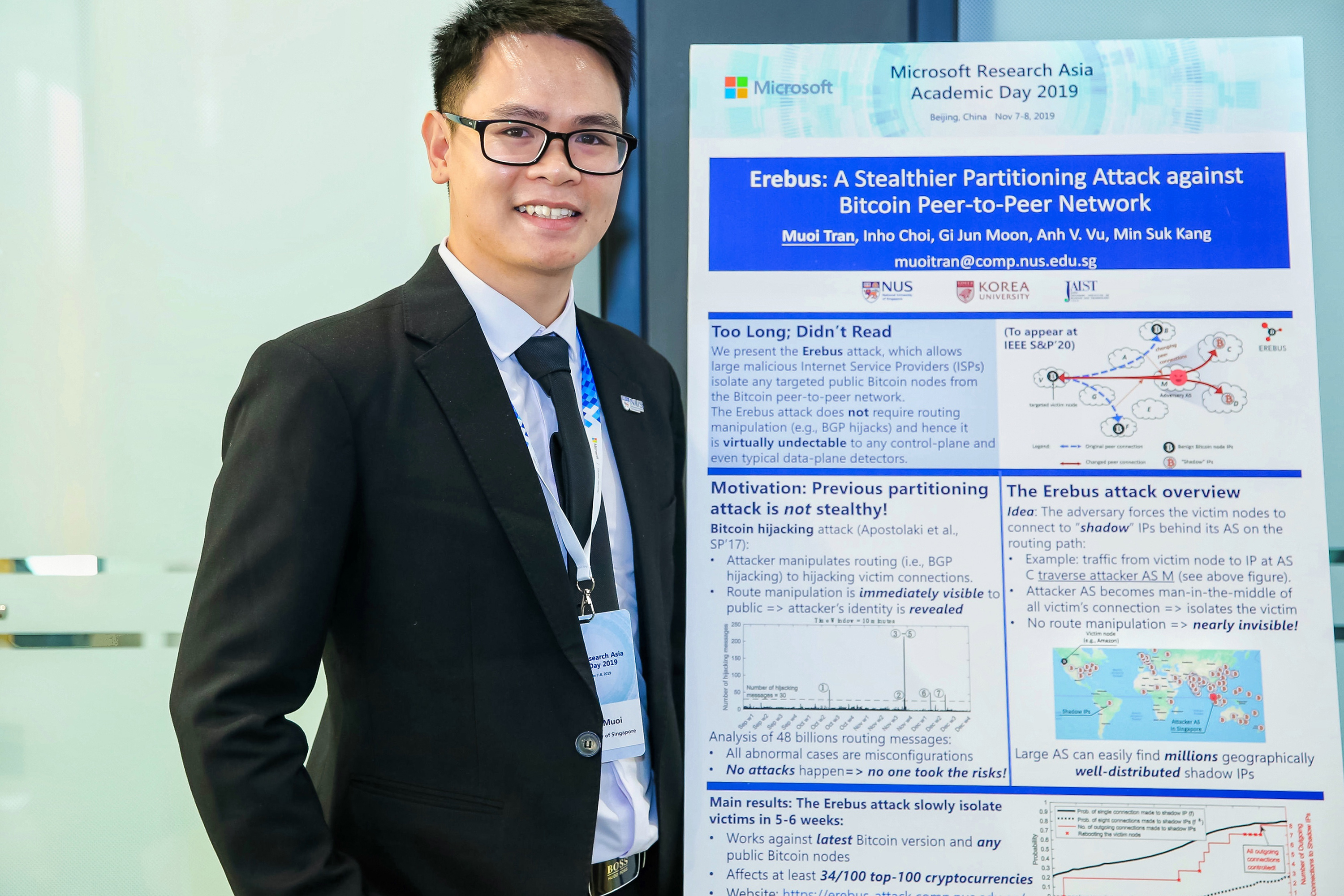 Over the course of his PhD candidature, Muoi devised a partitioning attack against Bitcoin peer-to-peer network which he called the Erebus attack. Perpetrators of the attack isolate one or more Bitcoin nodes from the rest of the network. By partitioning selected nodes, attackers can launch many serious attacks on the network.

One key feature of the Erebus attack is that the attack does not leave any evidence and it can go virtually undetectable. As such, this makes the attack very dangerous for Bitcoin and many other blockchain networks.

Muoi’s presentation on his research was well received by the fellowship selection panel due to the high impact of his work. “This attack is well appreciated by the Bitcoin and blockchain communities because of its high impact,” said Muoi. “The attack affects not only Bitcoin, the most popular blockchain-based cryptocurrency, but several other cryptocurrencies as well.”

In addition to formulating the attack, Muoi also proposed several modifications to the blockchain system that would make an Erebus attack significantly more difficult.

Muoi’s paper on the Erebus attack, titled “A Stealthier Partitioning Attack against Bitcoin Peer-to-Peer Network”, has been accepted in the 2020 IEEE Symposium on Security and Privacy (IEEE S&P). The IEEE S&P conference is one of the highest ranking conferences for computer security.

“The MSRA fellowship is one of the most prestigious awards for PhD students in this region and this achievement has encouraged me to continue moving forward in my research journey. This award would not have been possible without the support of my PhD supervisor Dr Kang Min Suk, as well as NUS Computing Associate Professor Prateek Saxena, National Taiwan University Professor Hsiao Hsu-chun and NUS Computing alumnus Dr Loi Luu. Last but not the least, I would not be where I am without the continuous encouragement and unconditional love from my wife Hoang Thi Van Anh,” Muoi added.

Muoi is a fourth-year PhD candidate under the supervision of Assistant Professor Kang Min Suk. His research interests are in the areas of network security and blockchain security and privacy. Since starting her PhD candidature in 2016, Taining’s research in databases has led her to develop various solutions on database query optimisation. A query is a request for information from a database. It extracts data from a database and formats it into a human-readable form.

According to Taining, her research provided new insights to the classic problems in database. Instead of pursuing state-of-the-art methods, Taining created solutions with good performance improvements with real world applications. Her paper on the topic, “Improving Join Reorderability with Compensation Operators”, was published in the 2018 ACM International Conference on Management of Data (SIGMOD).

Taining is a fourth-year PhD candidate under the supervision of Associate Professor Chan Chee Yong. Her research interests are in the areas of query processing and optimisation, data sampling, applied machine learning, and data analytics. She received her Bachelor’s degree in Computer Science from NUS Computing in 2016.