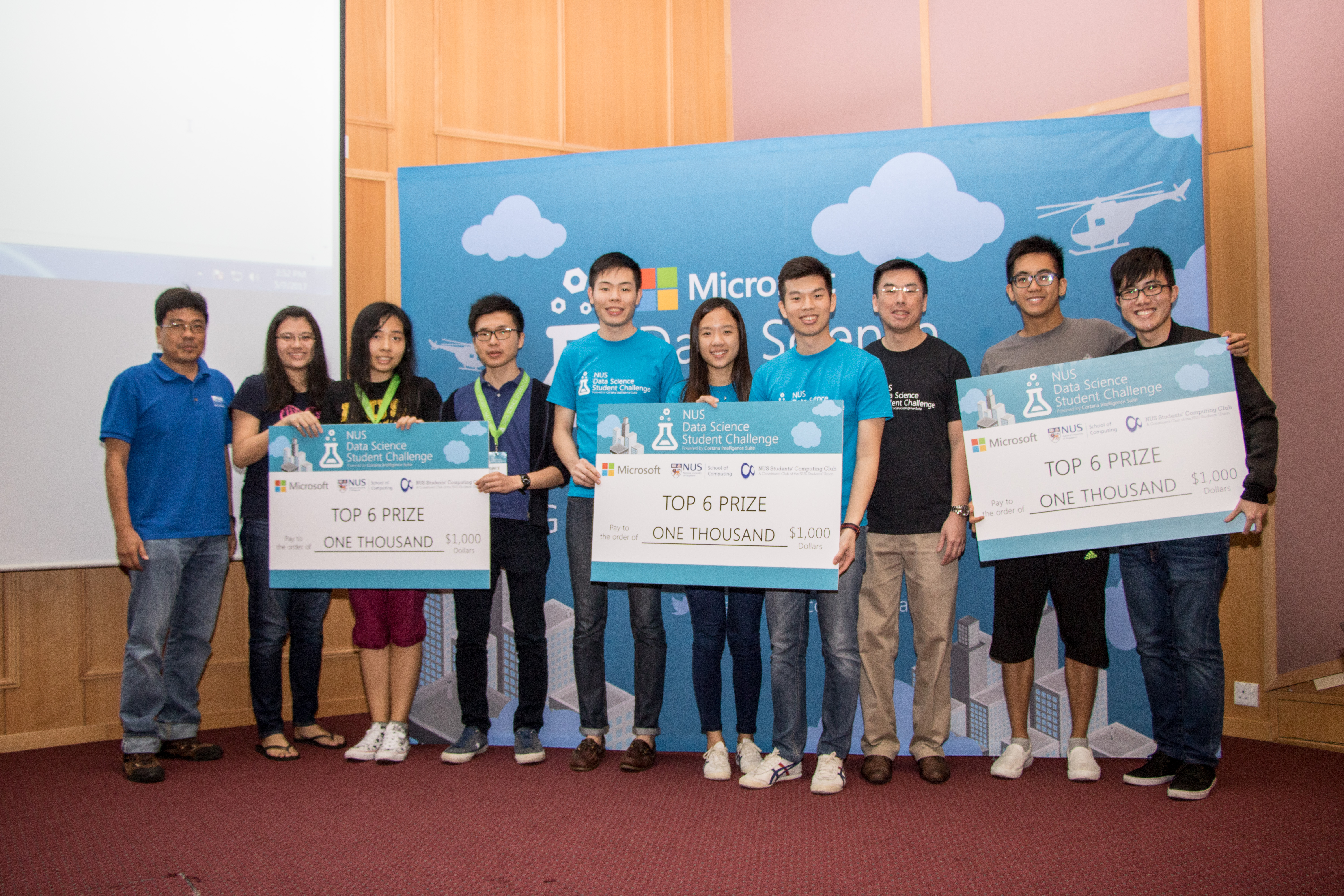 Jointly organised by NUS Computing, NUS Students’ Computing Club and Microsoft for the second consecutive year, the hackathon was held at NUS Computing from 6 to 7 May. Twenty-two teams from NUS, NTU, Singapore Polytechnic, BCA Academy and other educational institutions took part in the challenge, where each team had to utilise the Microsoft Azure cloud computing service, to develop solutions to problems in healthcare, education or energy. Each team had 24 hours to analyse the given data set, design an application and make a 3-5 minute presentation to a panel of judges. They were then evaluated on the technicality and business value of their solution, as well as their performance during the presentation. Comprising Year 4 Computer Science student Chan Jun Wei, Year 4 Statistics students Tan Zhang-you and Soh Cheng Tat, and Year 4 Applied Mathematics student Tey Jack Yi, Team R4 won third prize at the hackathon and was awarded a cash prize of $2000. The team collected audio recordings from phone interviews and analysed speech features to predict a person’s level of depression. They subsequently created a website that can record a visitor’s voice and then provide a prediction. Speaking on behalf of the team, Jun Wei said that they have several friends who suffer from depression, which spurred them to develop a model to address this problem.

Three teams, Team Megahard, Team Imaginativ and Team Ensemble, received the Top 6 prize and were each awarded with a cash prize of $1000. Team Megahard, which comprised Year 1 Computer Science student Zames Chua Feike, Year 1 Information Security student Loh Cai Jun and Year 1 Business Analytics student Chen Kuang, developed a chatbot interface to help predict users’ annual healthcare costs. Speaking on behalf of the team, Chen Kuang said, “We experienced difficulty in learning how to use the software effectively and the time constraint forced us to think of more feasible solutions. Furthermore, due to the sensitivity of healthcare data, we had to engage in data cleaning, which resulted in a small data set. Hence, our data model might not have been as accurate as we had initially hoped.” The team eventually learned how to use Microsoft Azure to generate models from data sets and gained much insight into the ideation process.

Team Imaginativ, which comprised Year 4 Computer Science students Luah Bao Jun and Daphne Won Jun Ru, and Year 4 Faculty of Arts and Social Sciences student Lin Jiahao, worked on the problem of reading and analysing tables and graphs in PDF documents and images, a process that they said requires much time and effort. The team’s solution was to build on the existing optical character recognition (OCR) tool by Microsoft and re-create interactive graphs and tables. Daphne said, “I have always been interested in data analytics and my first hackathon participation was an eye-opening experience as I was exposed to the latest data analytics tools that Microsoft has to offer.” She added that she has learnt that preparation, planning and presentation are crucial in any project.

Dr. Bimlesh Wadhwa, who initiated the hackathon with Microsoft last year, believes that the hackathon provides students with a platform to focus on solving real problems and achieving results, and also serves as a platform for the discussion and sharing of ideas on data science. She is positive that the hackathon will heighten awareness of the importance of data science among students in Singapore, and build a community of data scientists. She elaborated, “Hackathons help students realise their potential and show them that they can build what they want. They also allow students to learn beyond the classroom. While what we teach in the classroom are important fundamentals, hackathons provide students with the opportunity to apply the skills that they have learnt in class to real life problems.” Dr. Bimlesh added that the experience of organising and participating in these hackathons over the past two years has been very enriching for her and the students, and hopes to expand the event next year.