17 April 2018 – A team of three final-year Business Analytics students excelled at the Microsoft Imagine Cup 2018, emerging as champions of the National Finals and regional finalists in the Asia Pacific (APAC) Regional Finals.

Team Ruumi, consisting of NUS Computing students Chew Shao Quan, Neo Hui Yi and Lai Shumin, competed in the prestigious annual competition in which thousands of students from around the world are tasked to come up with innovative software applications.

The team competed in the Inter-University Hackathon, held on 10 February, where 15 teams competed for three qualifying spots in the National Finals round. Team Ruumi performed beyond expectations, and emerged as first runners-up, which earned them a spot in the next round. At the National Finals, held on 12 March, Team Ruumi beat eight other local teams and emerged as champions. The team proceeded to represent Singapore in the APAC Regional Finals, held in Kuala Lumpur from 2-5 April. A total of 15 teams from the APAC region competed for three spots in the Imagine Cup World Finals. Team Ruumi came in as Regional Finalists in the APAC round.

Shao Quan, Hui Yi and Shumin created a web application called Ruumi, which is the Estonian word for ‘space’. Ruumi operates as an online marketplace for users to lease and rent space for a short period of time, and in a secure and simple way. The app includes a chatbot feature for users to ask and answer questions, and an analytics dashboard to view usage metrics. The team created Ruumi to solve problems that people face in finding spaces that fit their needs.

“Given Singapore’s limited land space, it is tough for people to find conducive spaces that satisfy all their requirements. Existing spaces may not be conducive and may be expensive for short term use. On the other hand, companies and individuals have empty spaces that are not fully utilised. Ruumi aims to bridge the gap between space finders and space owners,” said Shumin, on behalf of her team.

The team incorporated new technology like Hyperledger Fabric Blockchain, Microsoft Power BI and Azure Machine Learning to their application, which gave their team an edge over the others. 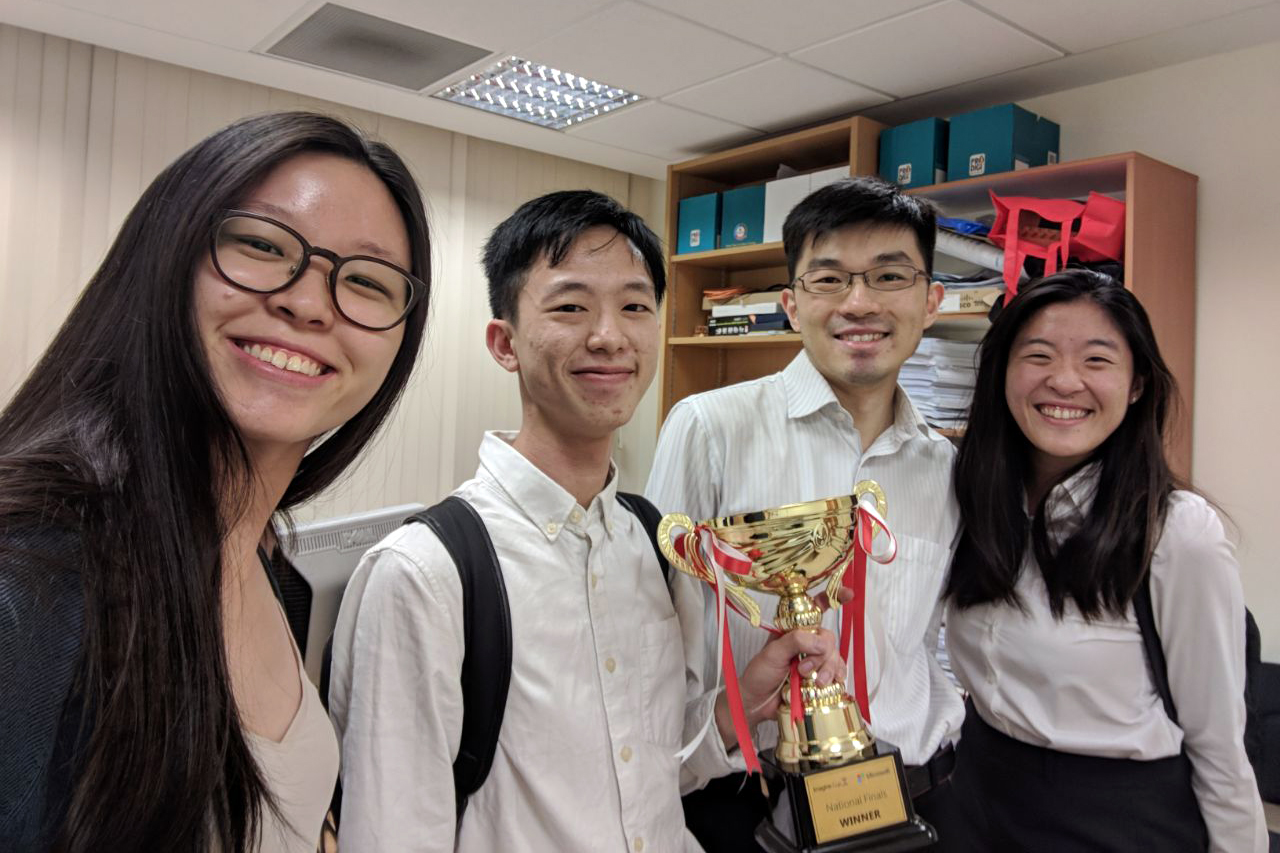 “Coming from a Business Analytics background, we are not as experienced in building applications as other competitors who major in computer science. However, we took up the challenge and tried our best. We spent many nights working hard on our solution and to build it up within a short period of time,” Shumin added. “We are thankful and honoured to have the opportunity to represent Singapore in the APAC Regional Finals. We would also like to thank Dr Lek Hsiang Hui for giving us invaluable advice and aid throughout the course of the competition.”

The Microsoft Imagine Cup is the world’s premier student technology competition. Held annually since 2003, computing students team up to use their creativity, passion and knowledge of technology to create applications. The theme for this year’s Imagine Cup is “Code with Purpose”, where competitors are tasked to develop projects that address a community or societal issue with technology.