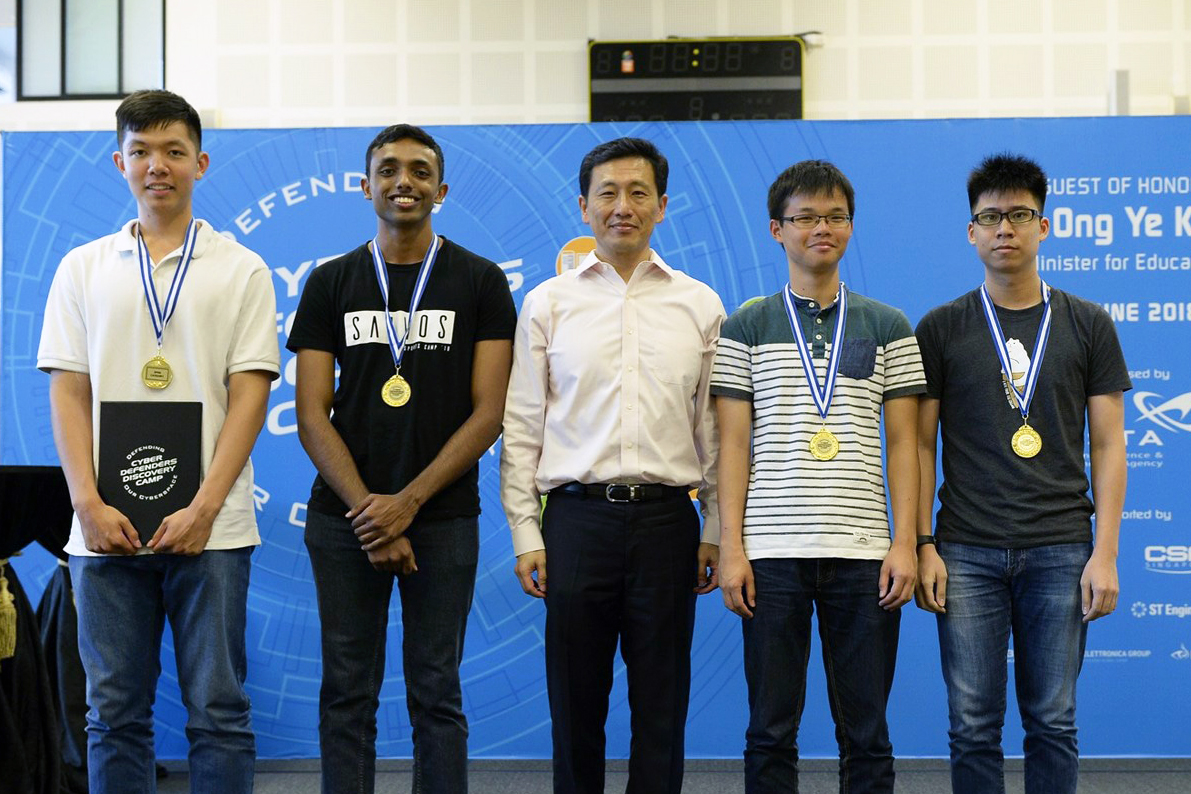 18 June 2018 – Two teams of NUS Computing students emerged as champions and second runner-up at the Cyber Defenders Discovery Camp 2018, held on 11 June at the Singapore University of Technology and Design (SUTD).

A total of 500 students from various junior colleges, Integrated Programme schools and tertiary institutions took part in the annual competition organised by the Defence Science & Technology Agency. This year, international teams were invited to participate in the competition. Teams competed in an online qualifier round from 1 to 2 June, from which 50 teams were selected to advance to an onsite ‘Capture-the-Flag competition. During the tournament, competitors had to explore and attack the competition network in a simulated environment, and set up a server while defending it from attacks. One key challenge this year, was to override and gain control of a Wi-Fi controlled drone.

Speaking on behalf of his team, Jing Han said they were surprised to clinch third place due to the strong competition they faced from the local and international teams. The team also found the duration of the tournament taxing, as they had to discover and solve an undisclosed number of tasks for seven hours straight. Despite these challenges, the team was able to communicate well and work with each other effectively throughout the tournament, which gave them an edge over the others.

Raynold, from the winning team, echoed the same sentiments, “The challenges were presented without any hints to guide us, and so we had to delegate work and effectively communicate our findings and calibrate our approach. This allowed us to use our time more effectively as we would know what worked and we did not have to duplicate effort that had no results.”

“The drone challenge was particularly nerve wrecking for us as we only had 40 minutes left on the clock when we unlocked it,” Raynold added. “We spent 10 minutes trying to connect the drone to the same Wi-Fi network and researching possible exploit techniques. The next twenty minutes were spent carrying out attacks but to no avail.”

With little time left, the team brainstormed and analysed the network setup, and that was when the team discovered a viable approach – they could disconnect the current user and connect to the drone before the disconnected user could reconnect. This approach allowed the team to gain control of the drone successfully, and helped clinch the win for the champions.