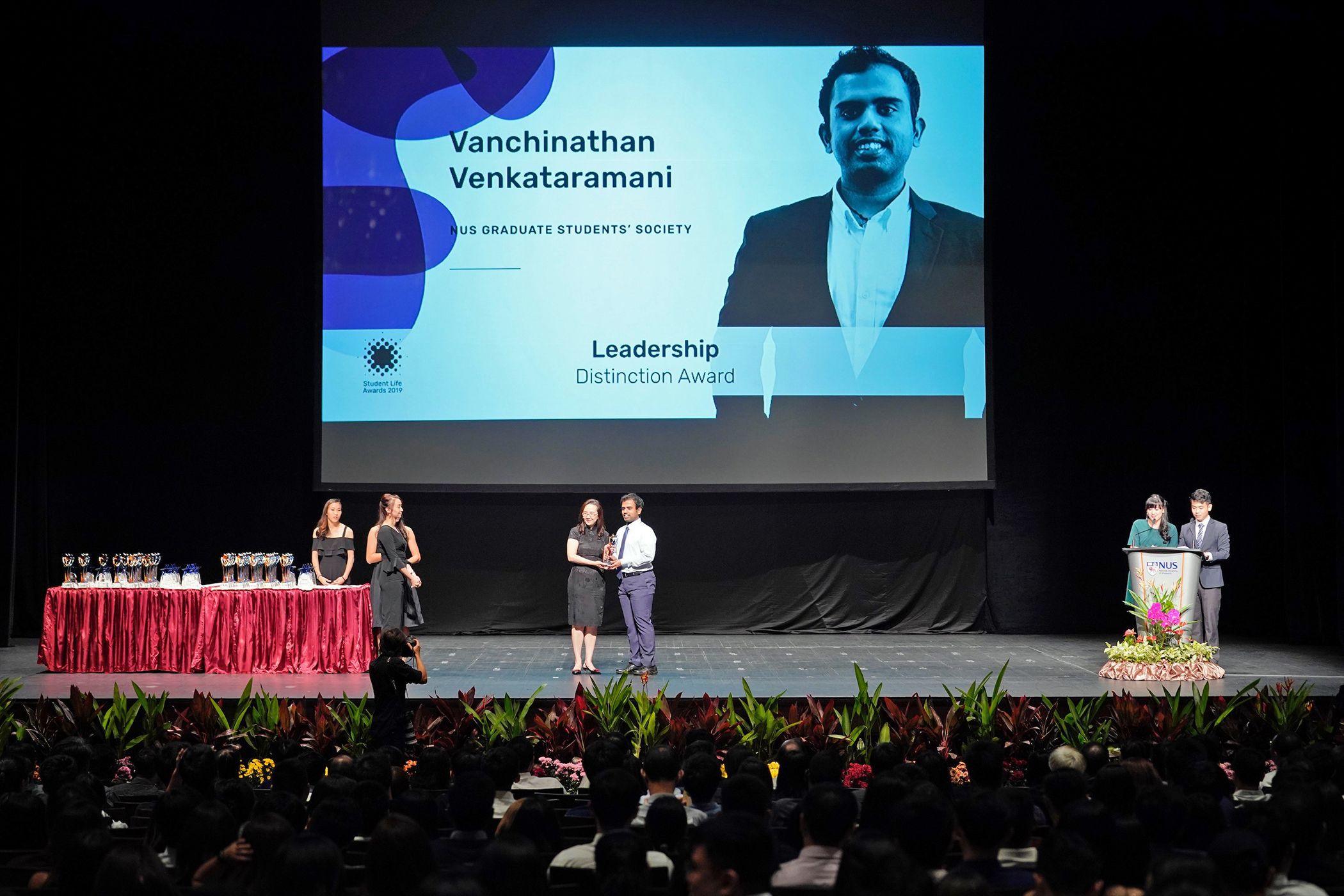 The Student Life Awards, organised by NUS Office of Student Affairs, recognises exceptional students or student groups for their noteworthy contributions to NUS in areas outside of academic curriculum. Out of a total of 246 applicants, 79 students received awards in five categories such as leadership, community service, community engagement, and competition. Vanchinathan joined NUS Computing as a Computer Engineering student back in 2008 and has been serving the NUS community since his undergraduate days. Before he took up the role as President of the Graduate Students’ Society, he served as social secretary and general secretary of the society from 2015 to 2017.

During his term as President, Vanchinathan drove new initiatives focusing on student development, welfare and community bonding. This included activities like the national-level Three Minute Thesis Competition – where graduate students from the various universities in Singapore were given three minutes to present their research in an engaging manner to an audience with no prior background in the research area. Other initiatives included distributing welfare packages at the NUS Bukit Timah campus, mobilising graduate students to give back to the community during the NUS Day of Service, and organising dialogue sessions with the various faculty’s vice deans.

“Receiving this award is a recognition of my service to my fellow undergraduate and graduate students from 2008 to 2018. It is a joy to give back to the university through my strengths and skills,” said Vanchinathan.

Leading with a passion for dance The cast and crew at CAC+US 2018, the Cultural Activities Club’s annual music and dance concert.

Hui Qi, currently the President of the Cultural Activities Club, has been actively leading different committees and projects during her time with the club. In the past two years, Hui Qi has been actively serving the club through various roles such as Publicity Director of BreakiNUS, NUS B-Boy society, and as Project Director of CAC+US, the club’s annual music and dance concert. She will be reprising her role as Project Director in this year’s upcoming concert, which will be held from 16 to 17 February. In addition to all these portfolios, she is also the Project Director of Funkamania 2019, CAC’s island wide dance competition for all local university students.

“As Project Director of CAC+US and President of CAC, I have to ensure that I give clear direction, goals and timeline to my committee,” said Hui Qi. “Through my past experience from planning events, I learnt it is important to create a timeline and to set deadlines for each month so that our planning is always on track.”

Beyond good planning and goal setting, Hui Qi believes that making difficult decisions is also a hallmark of a good leader. During the last CAC+US concert, one of the dance team’s music was unexpectedly cut off, which resulted in the team dancing without music for the latter half of their performance. “Seeing how the dance team weren’t able to fully enjoy themselves on stage due to the lack of music, I made the decision to get the dance group to perform once more as an encore item halfway through the concert. While it was an intimidating experience to make such a big and last minute decision with more than 1000 people in the audience, I’m still glad I made that choice,” said Hui Qi. Wei Liang (second from left), Ranald (centre) and Kien (second from right) at the ICPC Singapore regional contest held from 12 to 14 December 2018.

Ranald, Wei Liang and Kien have been representing NUS in the recent regional ICPC contests since 2017. The team received the Student Life award for their exceptional achievement at the 2017 ICPC Manila regional contest.

ICPC is the world’s oldest and largest programming contest for college students. Teams of three work to solve real-world problems with algorithms and are judged based on their speed, accuracy and endurance to last through the five hour deadline.

The team were crowned champions at Manila, and surpassed 35 other teams from various Asian universities. According to NUS Computing Senior Lecturer and NUS ICPC coach Dr Steven Halim, the team won the contest by a margin of three problems, the largest margin he has ever seen from an NUS team throughout his ICPC career.

The team were also winners of the recent 2018 Nakhon Pathom ICPC regional contest, held in December 2018. Ranald, Kien and Wei Liang defeated 69 other teams by solving 11 of the 12 algorithmic problems. The team also won based on their speed – they were also the first team to solve five problems.