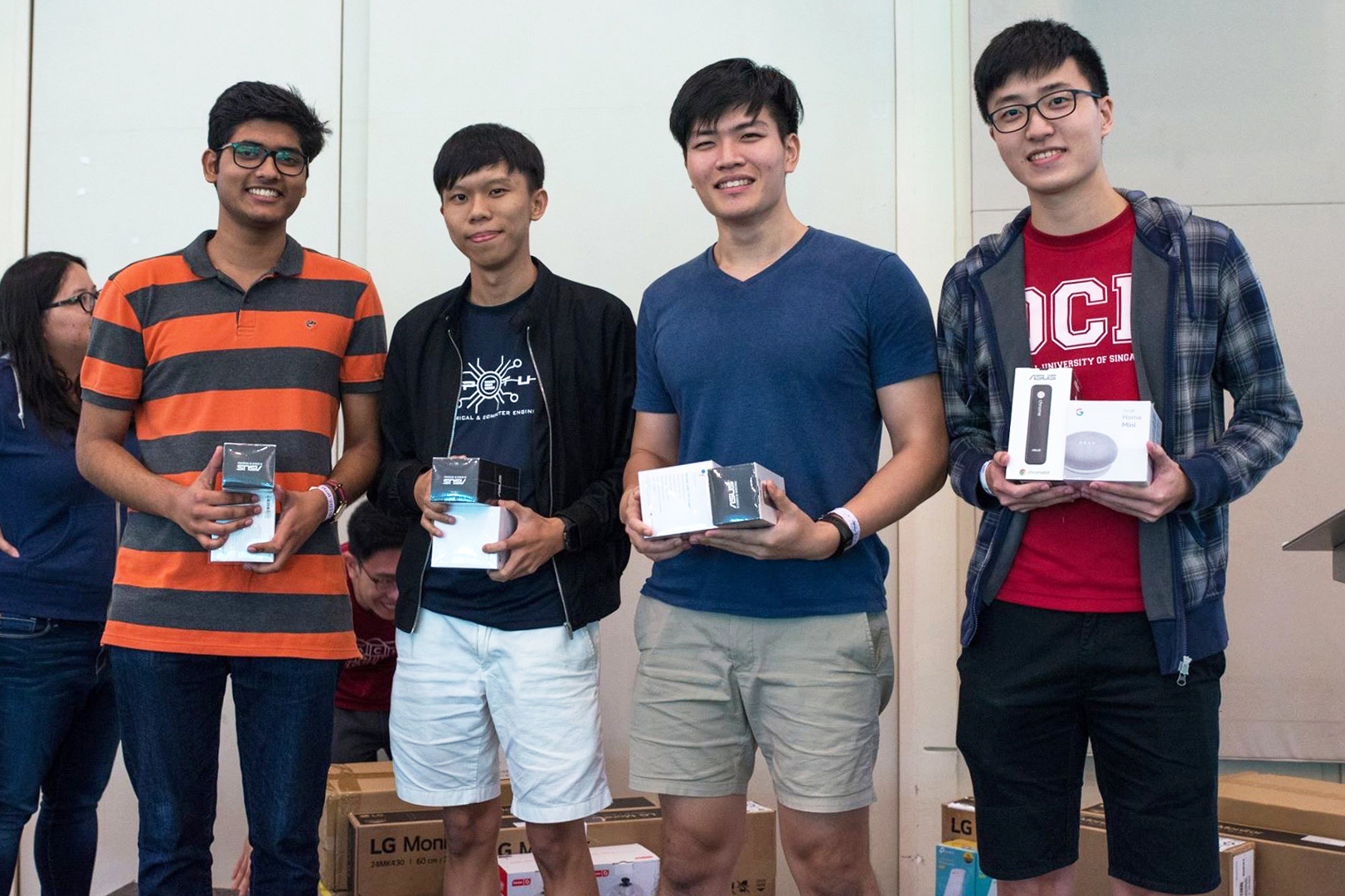 10 April 2019 – Eight NUS Computing students and their teams won three of the Top 8 Prizes for their outstanding hacks at Hack&Roll 2019. The hackathon was held from 19 to 20 January 2019 at Cinnamon and Tembusu Dining Hall in UTown, NUS.

Over 500 contestants formed 130 teams of four gathered to participate in NUS Hackers’ annual 24-hour hackathon, where students were challenged to build something new, creative, and unique, without any restrictions on the project type. The Top 8 Prize was given out to teams whose products were creative, technical, polished and useful. Lee Yan Hwa (Computer Science, Year 4), Jacqueline Cheong (Computer Science, Year 3), Harsh Gadodia (Computer Engineering, Year 4) and Calvin Tantio (Computer Engineering, Year 3) won the Top 8 Prize for their food credit exchange application, FoodExchange. “This project is inspired by the real-life pains of students staying on campus,” said Harsh on behalf of his team. “Students living on campus have to purchase meal plans and many only end up using about 70% of their meal credits.”

“It was our team’s first time using ReactJS and to develop a Telegram bot from scratch. We also had to fight off fatigue incurred from 24 hours of programming. While it was not easy coming up with the product, we are very proud of our work and we hope to continue working on it further so that it can contribute to the NUS community,” added Harsh. 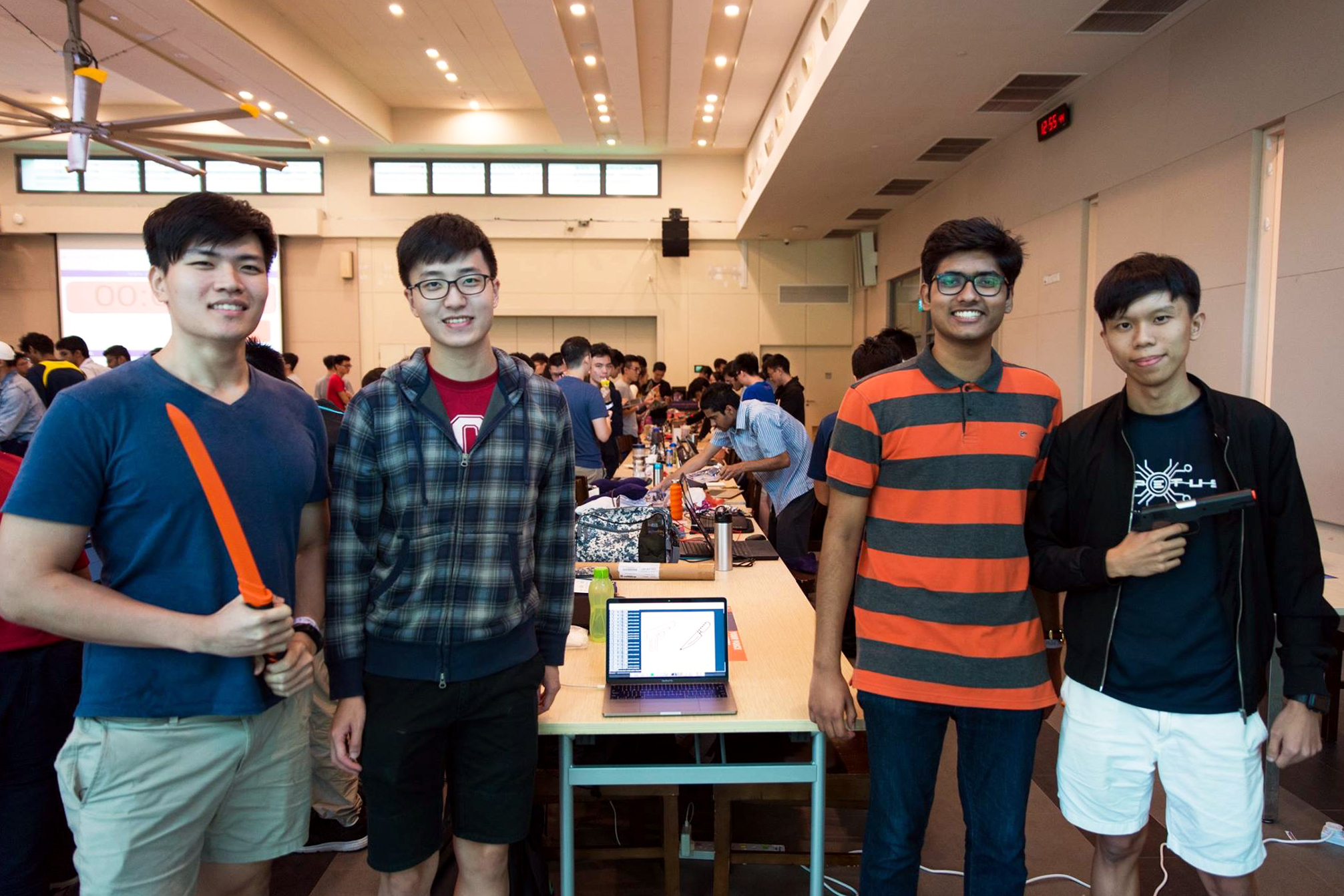 “Security operators today have to spend countless hours staring at multiple computer screens and analyse live feeds for suspicious activities,” said Wilson. “This leads to shorter attention span and reduced alertness. Our system provides an efficient way of scanning the environment for threats and calling for the operator’s attention when a potential situation is detected.”

With the team’s smart surveillance system, it can detect crimes committed with both small movements, like armed assault or robbery, and big movements, like stabbing. The team used machine learning and computer vision to recognise potential crime situations. “Other crime prediction softwares, such as Cloud Walk, perform citizen trustworthiness or use a social credit system to point out potential crime offenders. However, we believe that a system like this can be prone to discrimination. We wanted to create an alternative system that does not keep a permanent log of all activity,” Wilson added.

“We did not really expect to win the Top 8 Prize at the start, but after reassurances from the judges and feedback from the public, we felt that our idea was well-validated and we stood a decent chance of clinching an award.” Using the latest hardware, such as a Nvidia Jetson TX2, a Zed stereo camera, and a high capacity lithium-ion battery, the team’s autonomous race car is able to track objects visually across frames – a crucial step in enabling intelligent motion planning amidst obstacles. This same technology that the team applied can be used in future applications like developments in self-driving cars.

“Our team met each other at the Advanced Robotics Centre and our considerable knowledge in robotics helped us to configure the mechanical, electrical, and software components for the RC race car pretty proficiently. Furthermore, we also worked well together and all of us really enjoyed what we were doing, which made the whole process of developing a race car,” said Yiyuan, on behalf of his team.

“As we did not have formal electrical training we spent some time trying to debug a power distribution issue which caused our hardware to shutdown whenever it drew too much power. Despite the challenge, we were overall really surprised and proud that we were able to put together something that we used to take weeks,” Yiyuan added.